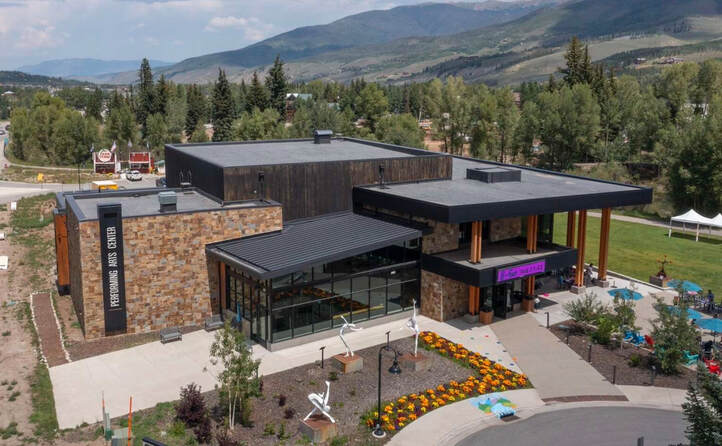 The community-driven Silverthorne Arts & Culture Strategic Plan was developed in 2016 and set the stage for building a sense of community, strengthening Silverthorne’s artful identity, and ultimately, leading to economic growth by investing in the arts.
Since 2018, the EnerJoy Monumental Trio — an art installation by sculptor Harold Linke — has welcomed visitors of the Silverthorne’s Performing Arts Center. Now, the town has purchased as the first major installation in their public art program.  The dedication was held June 3, 2022.

The City of Sheridan Wyoming purchased a heroic sized Girl Curl as part of their permanent public art collection.  We are awaiting news on the placement of her and a photo!  More to come! 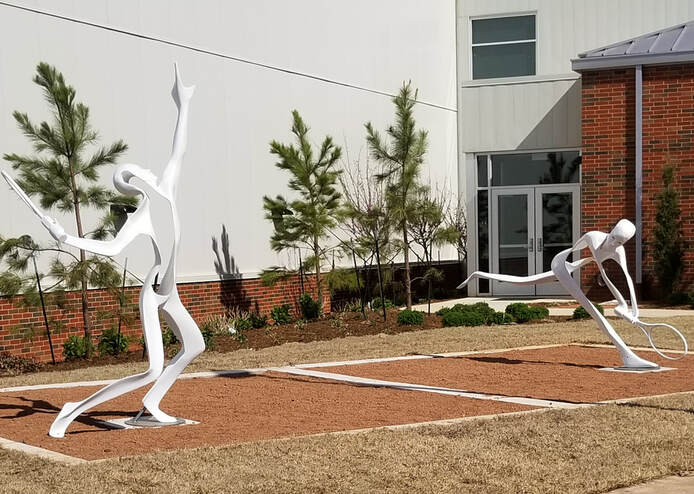 In August 2019, we were in our booth at Loveland's Sculpture in the Park when two representatives from Edmond, Oklahoma, stopped by and asked about my creative process, materials, and sculptures of dancers and athletes. We had a wonderful conversation and they came back for another look or two.  A few months later, I got a call for a commission of two tennis players for Edmond Center Court, their new tennis center.  Come to find out, this is no run-of-a-mill tennis center.   Edmond Center Court is considered as one of the top public facilities in the world.  Center Court has 24 outdoor courts including two stadium courts with seating, 6 indoor courts, as well as a state of the art 31,000 square foot club house.  Edmond Center Court has become the pride of the local tennis community through the facility construction by the City of Edmond, Edmond Public Schools and the ongoing support of the community.

Twice Alive and Still Point, my heroic pair of tennis players welcome players and visitors at the entrance to Center Court.  I am honored to be  a part of the Edmond community at this outstanding facility. 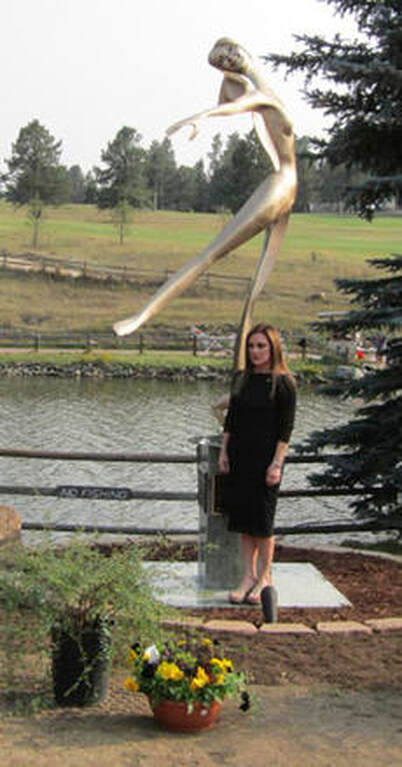 The artistry and grace of Olympic gold medalist Peggy Fleming has been immortalized in a bronze sculpture on the grounds at Evergreen Lake.

The 8-foot-tall sculpture of a figure skater stands on a granite pedestal to the right of the Lake House entrance in a spot where children skating on the lake will be able to see it. Fleming, who attended the outdoor dedication Thursday with her husband of 50 years Greg Jenkins, said she loved its location.

“This is a day I will never forget,” Fleming told about 80 people from Sculpture Evergreen, the Evergreen Park & Recreation District and the City of Denver, which owns the lake property. The sculpture is now part of Sculpture Evergreen’s permanent collection that can be seen throughout Evergreen.
​
Tricia Rosenthal, president of Sculpture Evergreen, told the audience that the organization, which celebrated its 25th anniversary last year, was thrilled to be part of bringing the Peggy Fleming Tribute sculpture to Evergreen Lake.
Before the ceremony, Fleming told well-wishers that she had no idea that her success would inspire generations to come.
​
Fleming was the only American athlete to win a gold medal in the 1968 Winter Olympics in Grenoble, France. She also has five U.S. titles and three world titles, and she spent more than 20 years as a TV commentator. Her legacy also is detailed at the U.S. Olympic and Paralympic Museum in Colorado Springs. Rosenthal asked the audience how many remembered Fleming on the ice in her chartreuse outfit in 1968 for the performance that earned her the gold medal. Nearly all hands went up. The sculpture depicts a young woman joyously skating, and Fleming said she was pleased with the details such as the arms and legs in the perfect position.

Sculptor Harold Linke called Thursday the culmination of hard work to bring the sculpture to fruition. “Sculptors live for these moments,” Linke said. “We spend all this time imagining what it will look like. Then you see it with people around. … Being here today is more than my heart can hold.” The sculpture is a replica of one Linke made in 2018 in honor of the 50th anniversary of Fleming’s gold. His stylized sculpture of a figure skater was used for the trophy for a new skating competition that Fleming created that takes into account the artistry of the skating more than the athleticism. Fleming is revered for her artistic skating.
The Peggy Fleming Trophy was awarded for the third time in July during a virtual competition.

Espiritu Libre has become a resident of St. Joseph MO.  She's dancing her free spirited dance in front of their wonderful Missouri Theater.  So very proud to be part of their community. 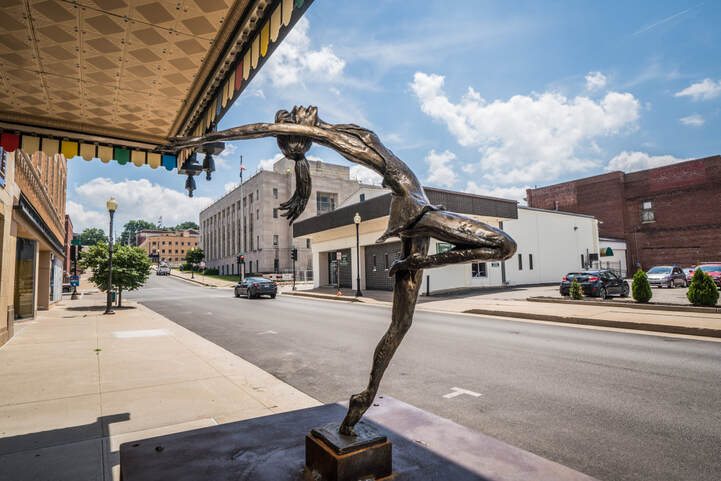 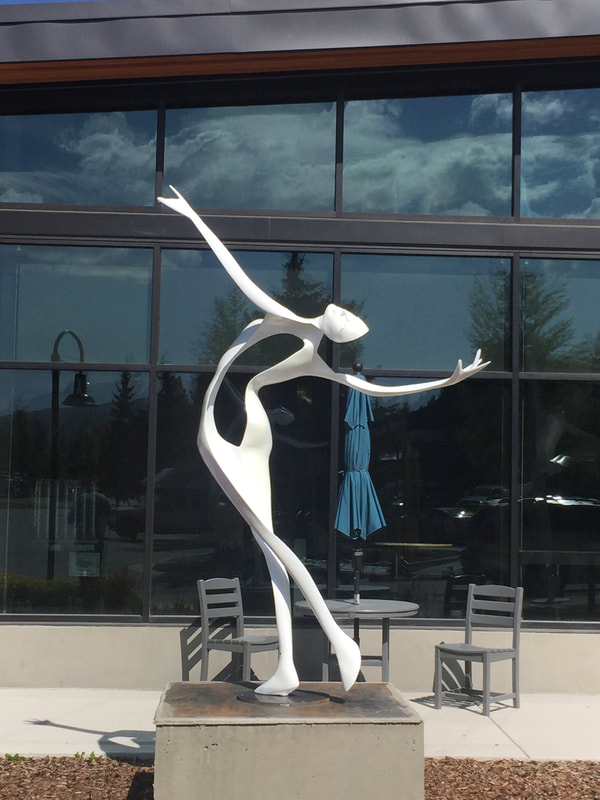 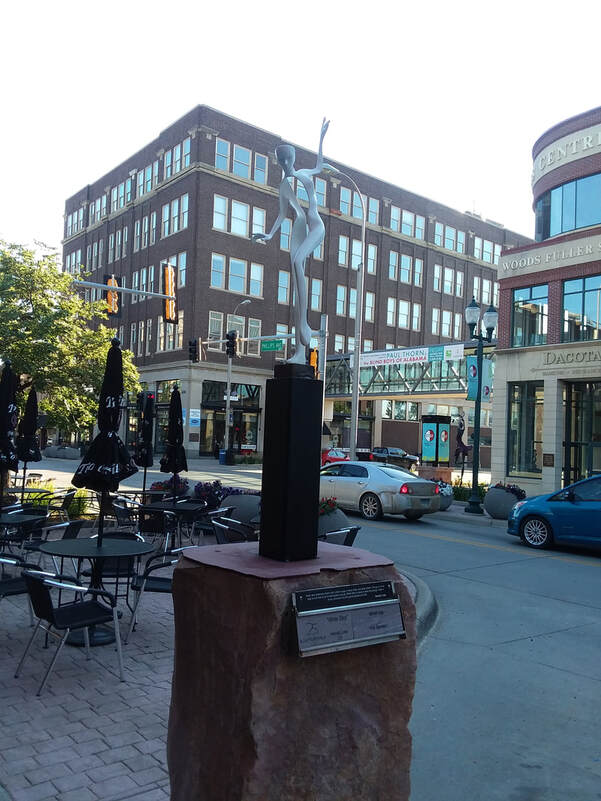 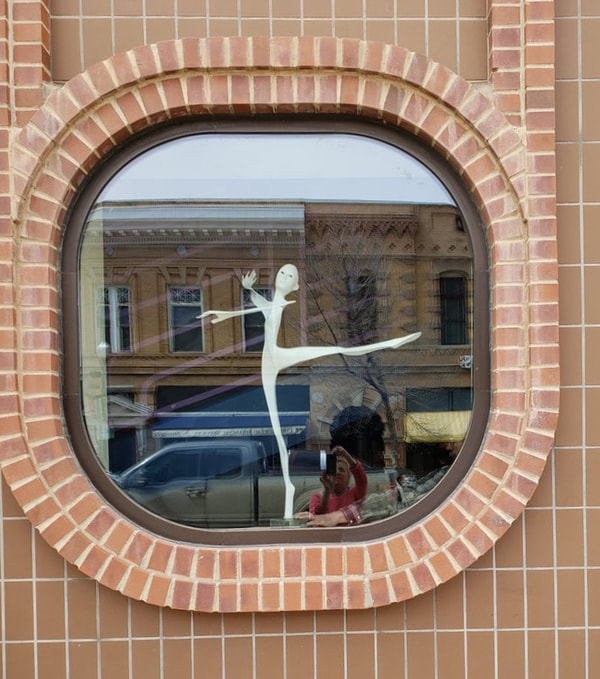 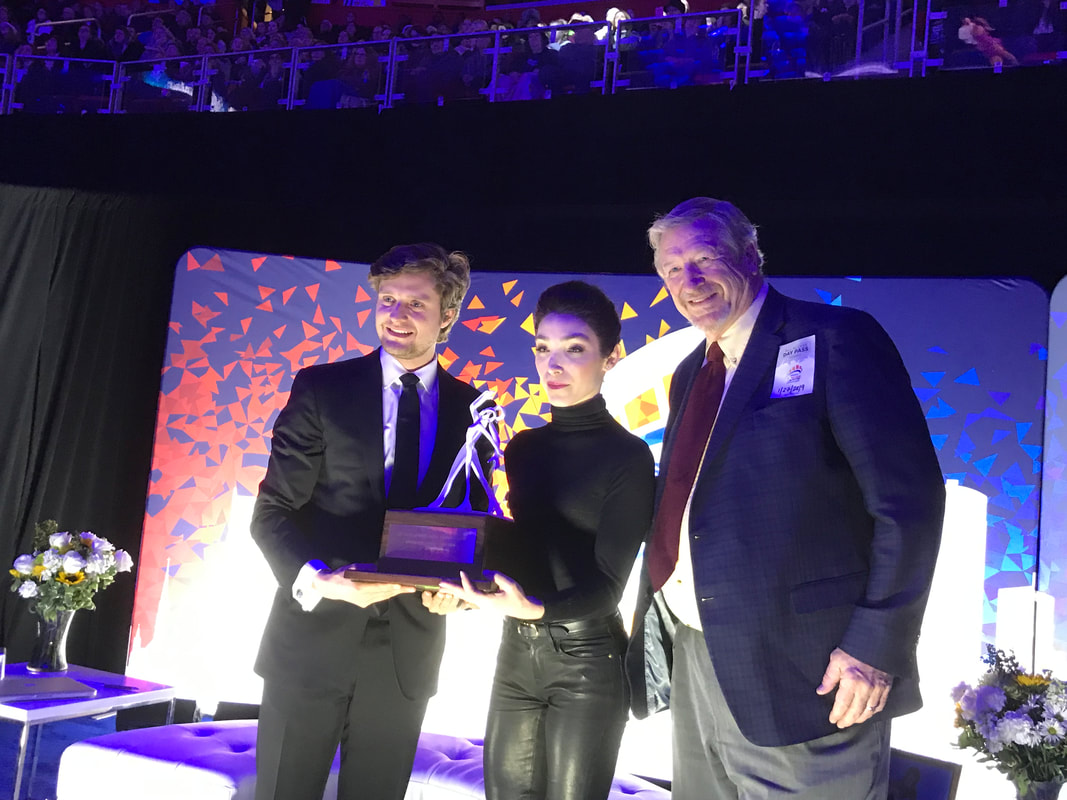 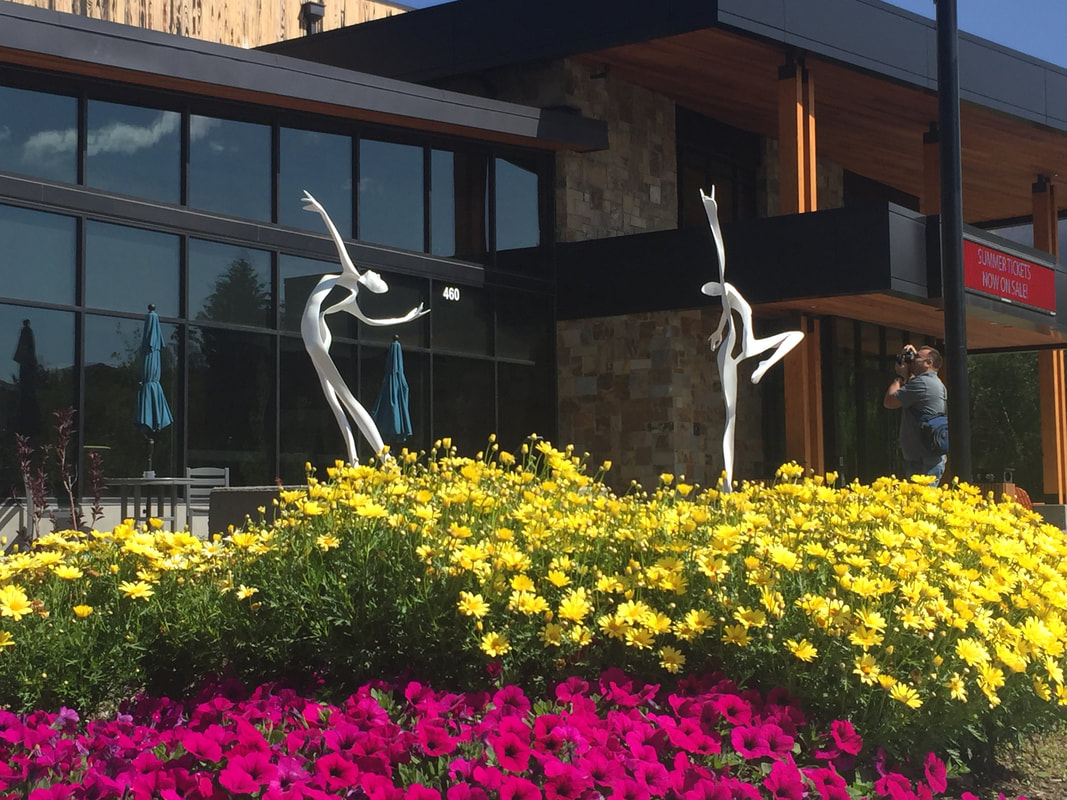 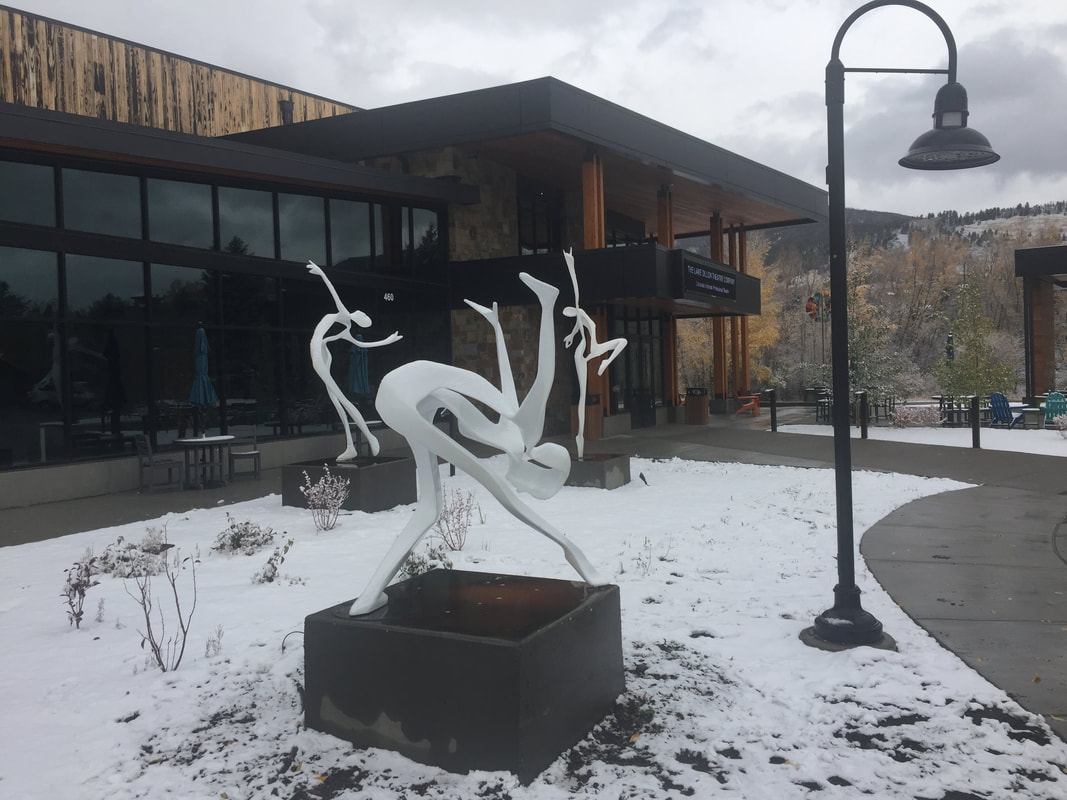 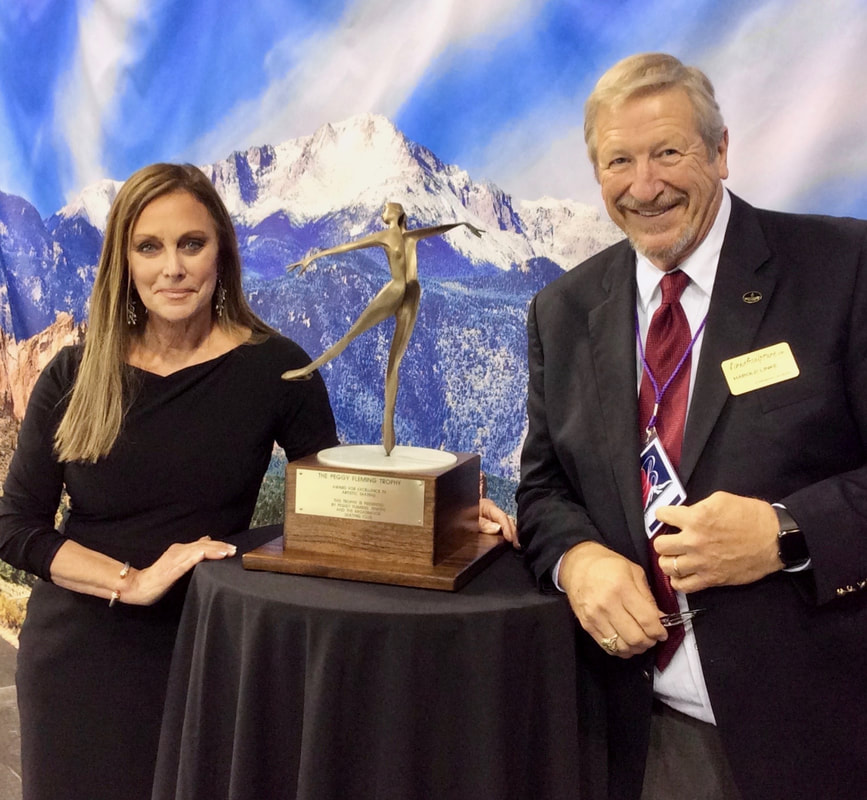 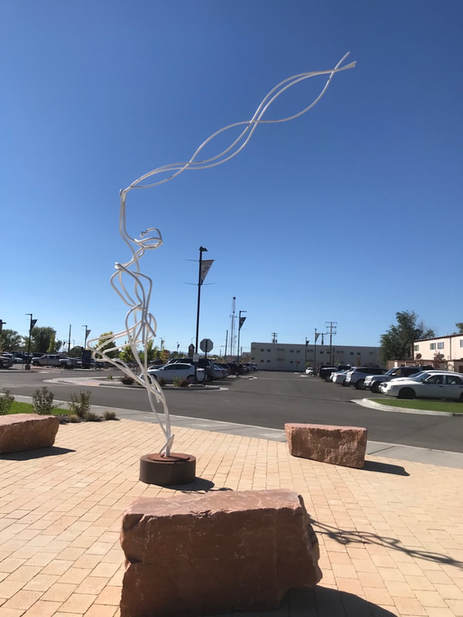 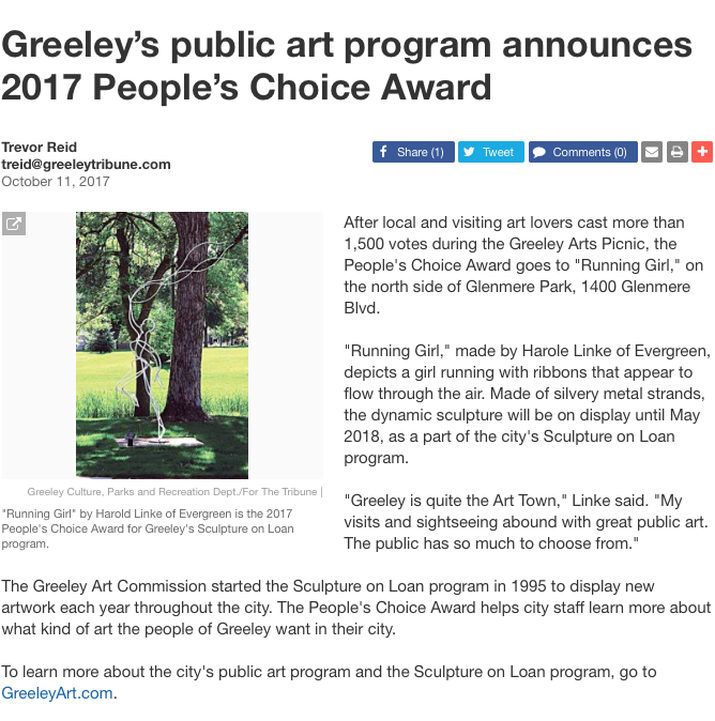 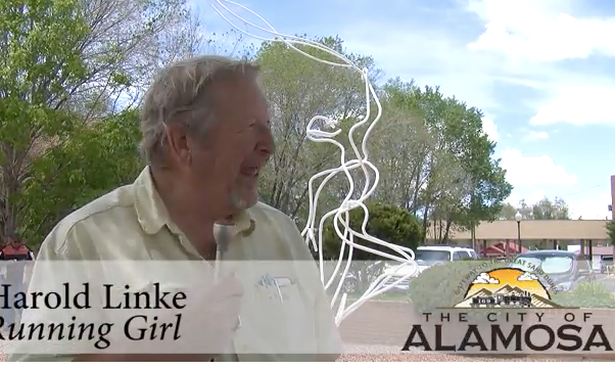